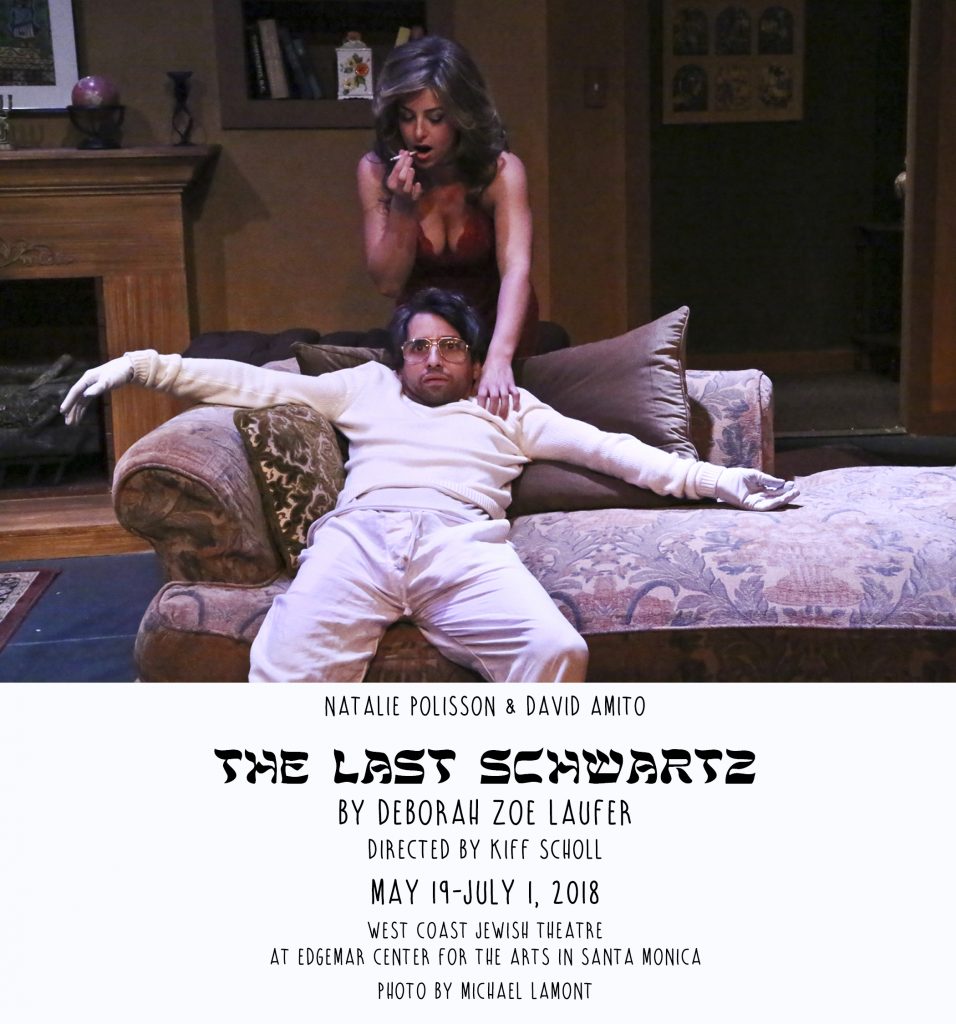 The West Coast Jewish Theatre now prforms The Last Schwartz as a guest production at the Edgemar Center For the Arts in Santa Monica. Written by Deborah Zoe Laufer and directed by Kiff Scholl, the play is produced by Howard Teichman and Bill Frogatt.

The story revolves around the Schwartz family home in upstate New York where siblings Herb (Warren Davis,) Norma (Cheryl David,) Simon (David Amito,) and Gene (Mike Bash,) come to honor the Yahrzeit (death anniversary) of their late father and unveiling of the tombstone.  Norma wants to keep the house and its memories while Herb favors selling.  Blind, autistic Simon is in his own world while Gene, who doesn’t seem to care one way or the other, has brought along his non-Jewish girlfriend Kia (Natalie Polisson.)  Herb’s wife, Bonnie (Samantha Klein or Rainbow Underhill) who had converted hoping that she would be accepted into the family, is desperate to please and help but pushed aside by take-charge Norma as not being important.

In the past I have truly enjoyed the West Coast Jewish Theatre plays and this dramady has adult themes as well as some rough language so parental guidance might be suggested for an audience under 15 years. 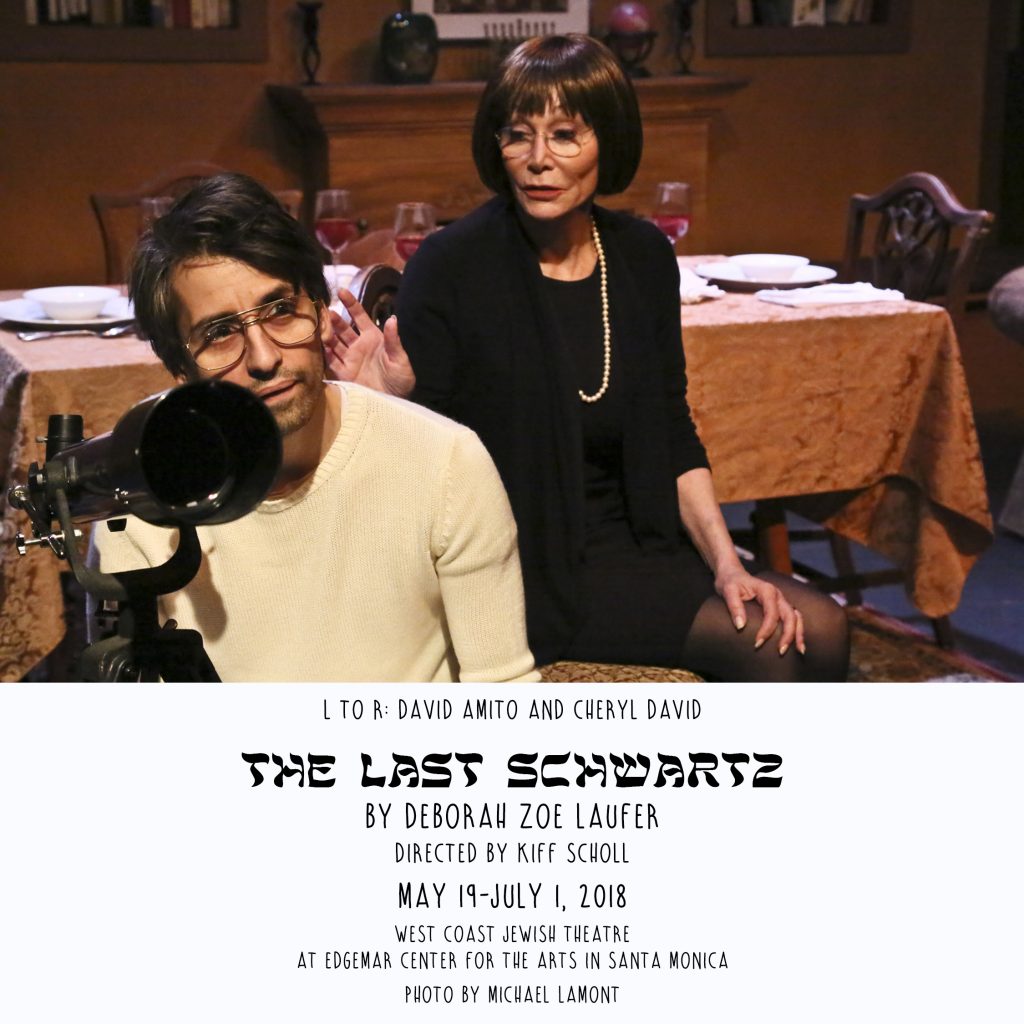 There is no intermission, but the first part had a lot of seemingly meaningless banter and felt slow with the little humor being forced.  The cliché dialogue was predictable allowing me to mouth the next words before the character said them.  Only as the play progressed did the real essence come out.  Even that seemed to have short shift in the tangle of relationships.  The secrets that Bonnie kept throughout the story – one did nothing for the theme but show how dysfunctional the family was and the other…well, I’ll leave that for you decide if you see the play. 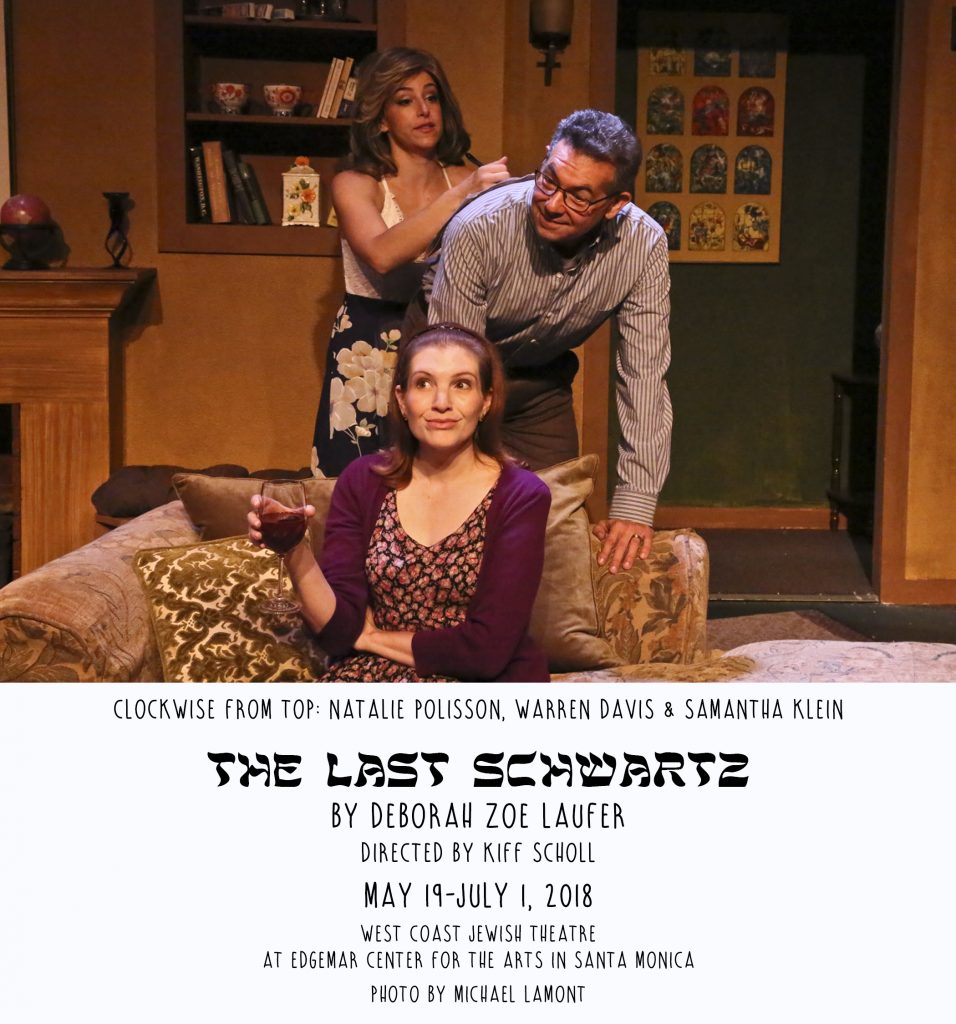 I saw no real arcs in any of the characters, no realization of change or the fact that their family, relationships, or religion was in danger. The ending had very little to do with the theme – except to show that each lived in their own world as they had before they came.  There appeared no closure to the story…at least nothing that made sense to the theme. 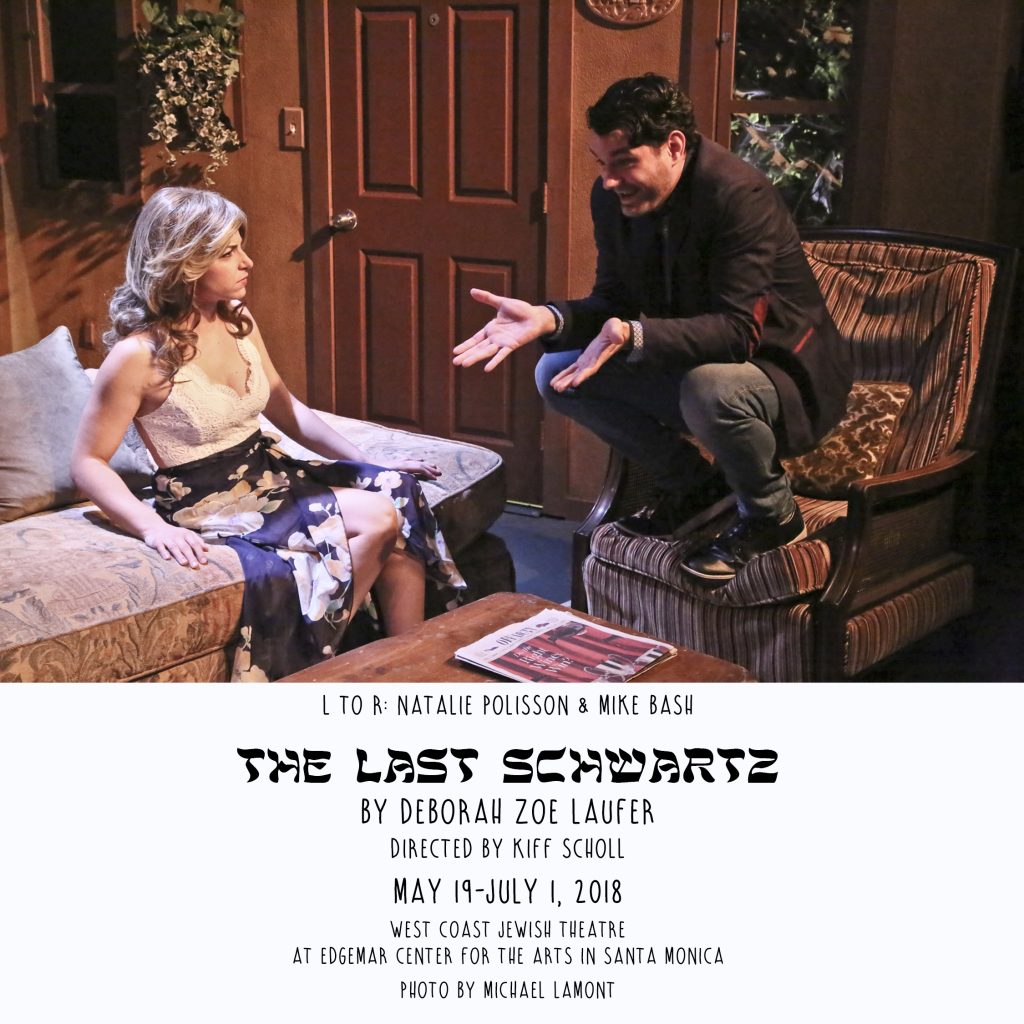 While the acting was good, the story was similar to one I saw recently. Each wondered about the survival of the faith, each played off a stereotypical blonde culturally-ignorant shiska (non-Jewish girlfriend) who considers herself “American” but knows nothing about her own background or heritage. Each used the shiska as a backdrop to explain why we need to be concerned about assimilation and survival of the Jews in America, but the passion for the argument fell short in Last Schwartz.

The Last Schwartz made a fair attempt, but I’d rate it four rock-hard matza balls.

Set design was done by Jeff G. Rack and Amanda Sauter, lights by Ellen Monocroussos, hair and wig by Judi Lewin, still photos by Michael Lamont, sound by Bill Froggatt, who also served as stage manager and associate producer, and casting was done by Raul Staggs while publicity is done by Philip Sokoloff.

Deborah Laufer’s plays have been produced for international audiences and Mr. Scholl has directed both stage and feature. 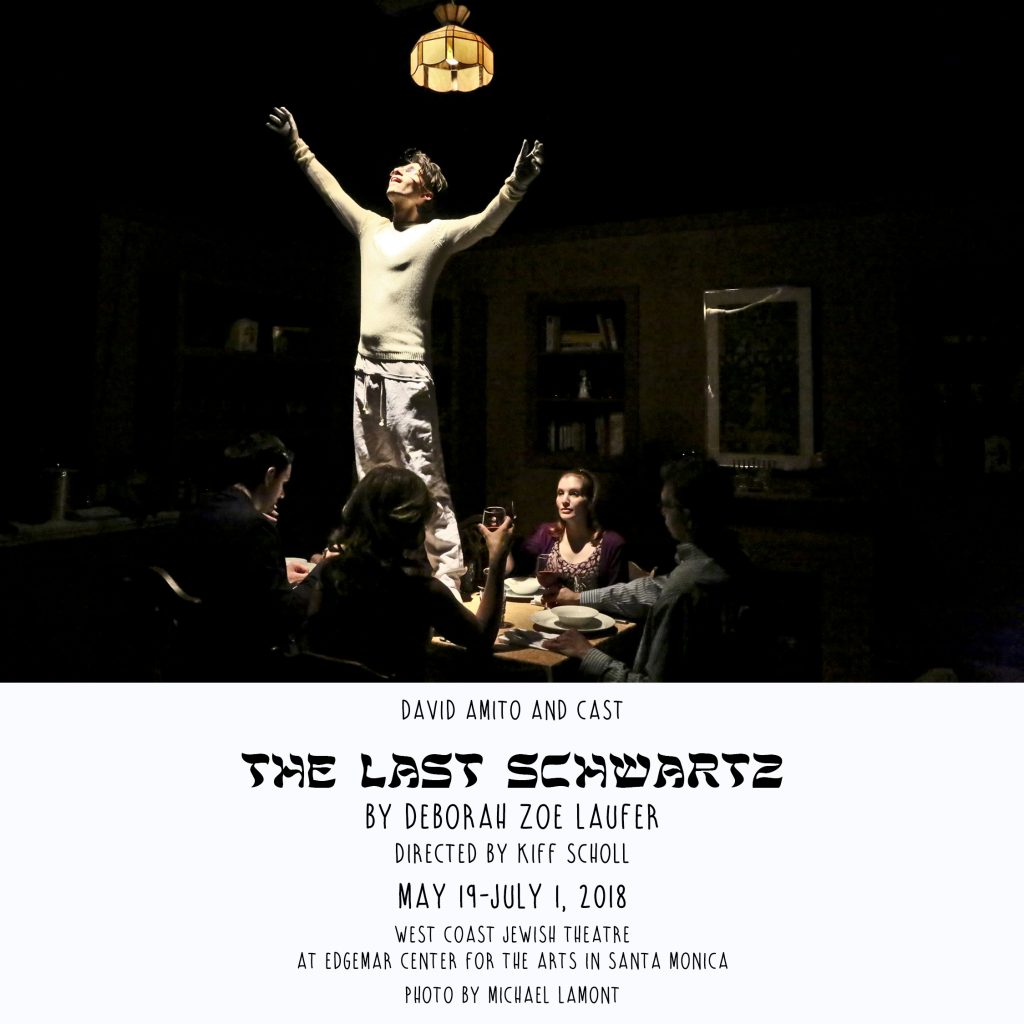 The play runs until July 1, 2018 on Fridays and Saturdays at 8 pm with a Sunday performance at 3 pm.  Tickets run from $25 – for students and teachers with ID, to $40.  There is paid parking in the lot across the street, but also a metered municipal lot a bit further. Reservations can be made by calling 310-392-7327.

About Serita Stevens 37 Articles
An award winning writer of books, scripts, adaptations and teacher of writing I am also a forensic nurse and assist writers, producers, and attorneys with their medical, forensic, poison and investigative scenes in their stories or cases.
Website Facebook Twitter Google+ LinkedIn