New York City has always had the best entertainment the world over – visitors and locals alike can see Broadway shows, off-Broadway, cabaret, comedy, and tons of attractions and sights.  This year, there was an extra-special Christmas show in Manhattan, brought to you by The Girl Behind The Curtain Productions  and Shea Arender – “The Original Rockabilly Christmas.” 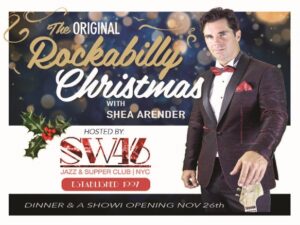 Held on restaurant row at Swing 46-Jazz & Supper Club, 349 W 46th St, between 8th and 9th Ave, this heart-warming, foot-stomping night of music gets you in the holiday mood from the moment the band starts to play… and doesn’t let up – not even after you’ve walked out the door, because you’ll be singing or humming the songs – and fondly remembering the evening. 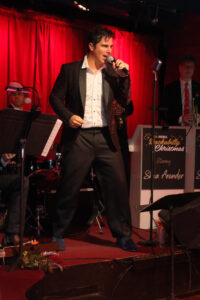 Star of the show is the handsome and charismatic Shea Arender, who delivers his melodies with tons of energy, exciting dance moves, and a smooth rockabilly voice that takes you back to the nostalgic years of Elvis Presley. 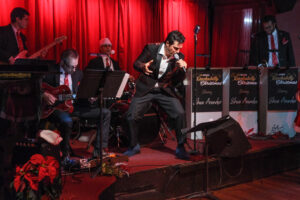 Shea graces the evening with lots of holiday songs, including Blue Christmas, I’ll be Home for Xmas, Let it Snow and Santa Claus Rock. 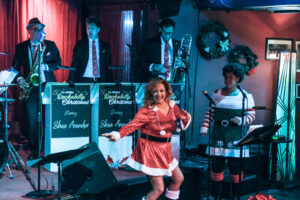 Female singers Sarah Hayes and Jade Litaker back him up on vocals, and also get the chance to do solos and show off their own marvelous voices.  It was a fun moment when Sarah told Shea she had a present for him – and surprised the audience – by giving him a pair of Blue Suede Shoes!  Shea put them on and launched into a rockin’ rendition of the Elvis classic. 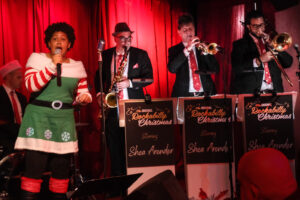 The band was top-tier and featured solos by pianist and vocalist Robert Cookman who kept it hot and swinging with songs Great Balls of Fire and I’m on Fire. 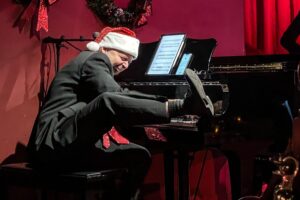 The Original Rockabilly Christmas began its limited run on November 26th and delivered fabulous nights of entertainment at a wonderful supper club in the heart of New York City.  What a joyous way to begin the holiday season! 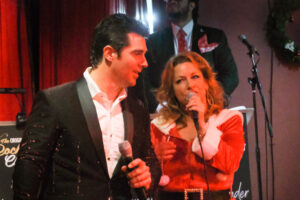 There’s no question that Shea is an awesome performer, but he is also an amazing entrepreneur with other impressive ventures. In addition to being a super talented vocalist, arranger and songwriter, Shea is the CEO/owner of the Las Vegas Symphony Orchestra and a Broadway producer. Since July 2013, he has been executive producing Harold Arlen‘s Broadway Estate musical “The Wonderful Wizard of Song” Musical, that enjoyed  a two-year Off-Broadway run and a one-year touring production. The Harold Arlen 550 song catalog is one of the largest music catalogs in American Music History, and Shea is most proud of this work keeping one of the greatest songbooks alive and in theaters throughout the US and around the world. 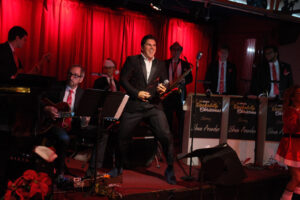 Shea’s love of Elvis is evident in his singing, but he exhibits it in his personal life as well. Among the many vintage items he collects is the original, mint condition, 1957 Pink Cadillac previously owned by the King himself, Elvis Presley. 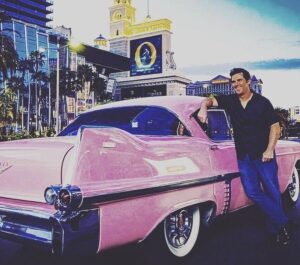 I was thrilled to be in New York for this glorious holiday season, and The Original Rockabilly Christmas was a dynamic and fun event.  If you missed it, check out Shea Arender when you visit Las Vegas – or you may get lucky and find him on one of his tours.  Shea also plans a new spring opening to bring his full 60-Piece Orchestral Rockabilly Show to NYC for 2022, in the style of The King Symphonic from Las Vegas! 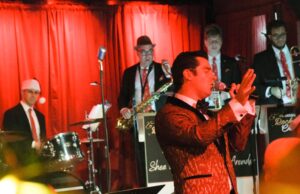 Check out a video clip here: The Original Rockabilly Christmas

Meanwhile, Happy Holidays to all… wishing you a Rockin’ and Rockabilly Christmas!

About Marilyn Anderson 20 Articles
Marilyn Anderson is an award-winning author, film and television writer. She wrote for Murphy Brown, FAME, Friday the 13th - the Series, and Carol & Company, starring Carol Burnett. Marilyn wrote and produced the family feature film, How to Beat a Bully. She is the author of How to Live Like a MILLIONAIRE When You're a Million Short.
Website Facebook Twitter YouTube LinkedIn

November 3, 2017 Meagan Sargent LOS ANGELES 0
Spread the love
Spread the loveMany know her from the infamous single, Roses, which just happened to be the song for 2016. The single not only put The Chainsmokers on the map, but it laid the foundation to […]

Corey Feldman “Celebrates Nu-Mix of “Feeling Funky”, Hope for the Homeless, The Summer of Love” and an NFT Extravaganza”

July 30, 2021 Eileen Shapiro Film, TV & Books 0
Spread the love
Spread the loveCelebrated actor, producer and recording superstar Corey Feldman has joyously released the  nu-mix of “Feeling Funky” via CosmicWire/Blazar for his 5.0 Birthday jubilation…..  Although many recognize Feldman for his movies including: “Stand By Me”, […]

August 1, 2018 Suzanne Magnuson Music & Arts 0
Spread the love
Spread the loveFans have been missing one of the most glorious voices of our time since the death of Whitney Houston on February 11, 2012.  But now, through the efforts of Showtime Australia, known for […]